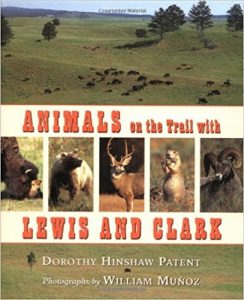 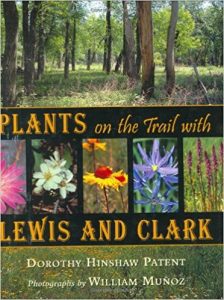 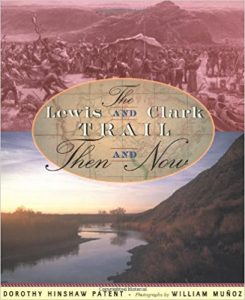 “Animals on the Trail with Lewis and Clark” follows their journey as the explorers observed and documented scores of animals, including the Great Plains wolf, mule deer, prairie dogs, grizzly bears, and salmon. The expedition recorded several species and subspecies of mammals, birds, and fish previously unknown to science.  The information gathered would serve as the basis of scientific study for years to come. Stunning photographs by William Munoz catalog the diverse array of wildlife witnessed by Lewis and Clark. This book is out of print but new copies are available here:

“Plants on the Trail with Lewis and Clark” recounts how the explorers collected and preserved nearly two hundred seeds and specimens, from small prairie flowers to towering evergreen trees, many of them previously unknown to science. The Indians they encountered taught them which plants were edible and which could be used as building materials for their canoes and shelters.
This book is also out of print but new copies are available here:

The Lewis and Clark Trail Then and Now” is available from Amazon.com.  Many sites along the way have changed dramatically.  Others, in areas such as where I live in Montana, have changed little over time.

In all my writings, I stress that Native American tribes knew the land and its living things intimately, and the expedition learned from them. The expedition didn’t “discover” the West.  But it did document some features for European American science and culture.

I’ve developed two handouts for teachers on using these books in the classroom.  L&CCurriculumHandout gives suggestions on using Lewis and Clark’s voyage in various curriculum areas such as history, geography, and science.  L&CScienceHandout focuses on science.

I’ve also created a PowerPoint presentation I love to share with students during school visits.  For more information about school visits, or to request a personally inscribed signed copy of a book, fill out this form to contact me by email.