“Do As I Do” dog training, developed by animal behavior scientist Claudia Fugazza (Shown above with one of her dogs), fascinated me when I visited the Family Dog Project in Budapest recently.  During this process, the dog learns to copy the moves of the trainer.  With the dog sitting in front of her, the trainer twirls around and then jumps up and down.  Then, upon the command “Do it!,” the dog twirls, then jumps up.  The trainer might get the dog’s attention, then walk over to a box, climb on top and return.  Again, upon the command “Do it!” the dog copies and hurries back for its reward.  There wasn’t a dog in training at the time I visited, but I watched videos of dogs  copying what the trainer just did after being told to “Do it.”

Some years ago, I followed some puppies in their initial learning about becoming service dogs, resulting in my book, “The Right Dog for the Job: Irah’s Path from Service Dog to Guide Dog.”

Service dogs often need to master tasks that don’t come naturally, so it can take a lot of time to get them to understand what was being asked.  For example, training the puppies to push the handicapped button to open a door began by rewarding the puppy for putting its paw on a coffee can lid that hid a treat.  The handicapped symbol was painted on the lid.  The puppies were rewarded when they pawed at the lid, so they gradually learned they should poke that symbol when asked.  The learning then had to be translated to an actual handicapped door opener in a building.

With Do As I Do training, the dog can learn a complex series of acts just by watching the trainer demonstrate, copying the action, and receiving a reward.  The trainer then attaches the action to a command, and the dog is all set.  Hours of work can be bypassed using this technique, especially when teaching actions that don’t come naturally to dogs.

Take a look at Claudia’s book, “Do As I Do: Using Social Learning to Train Dogs,” which comes with a helpful DVD. 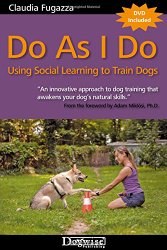