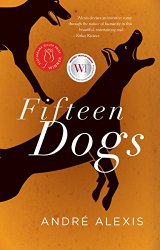 I recently finished reading Fifteen Dogs, by Canadian author André Alexis.  This thoughtful book uses dogs given ‘human intelligence’ to explore questions of thought, feeling, life and death, and other aspects of what it means to be human or canine.  I would recommend it to all philosophically inclined readers, not just for dog lovers.

Despite my positive feelings about the book, I find problems with Alexis’s take on “dog.”  His version of “dog” feels more like “wolf” to me–his dogs, with a couple of major exceptions, mostly have neutral or negative feelings toward humans, tolerating people because they offer food, shelter, and protection, making them convenient companions, rather than beloved family or friends.  Just one of these modified canines develops a truly deep bonding with a human.

The chief mental/emotional difference between wolves and dogs is that dogs look to humans for relationship as much as or more than they look to one another, while wolves, even when hand-raised by people, rarely see humans as potential partners.  This isn’t just an opinion; scientists study these differences as well.  For example, given a difficult food-finding task, wolves focus on the challenge and work to solve it on their own, while dogs will literally ‘look to’ a nearby human for help if it can’t figure the problem out quickly.

As far as ‘feelings’ go, scientific studies show that when people pet dogs, the concentration of oxytocin, sometimes called the “love hormone,” in the blood increases in both the dog and the person.  This creates positive emotions in the human, which suggests that the dog also feels positively about the experience.  Recent studies using functional MRI, show that the same parts of a dog’s brain light up upon seeing their “person” as light up in people who anticipate a positive experience.

Most of Alexis’s dogs also seem to lack positive emotional connection to one another.  There’s respect and fear, but few examples of love among the canines, who are more than willing to bite and even kill one another, including pack mates, without compunction.  Again, with a couple of exceptions, each animal evaluates situations almost purely from its own point of view, how it can take advantage, maintain its status, and stay strong and safe.

That said, I did enjoy how his dogs view the world through their sort of hybrid dog/human mentality, providing quirky takes on dog and human motivation and feeling.  There’s much food for thought here.