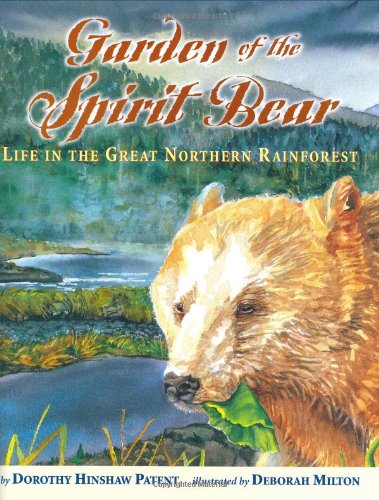 I’ve always loved bears.  Their strength and intelligence and their adaptability to different habitats fascinates me.  I’ve shared my enthusiasm for these animals with readers often, as you can see from the banner and the list of my published books.

My artist friend Deborah Milton and I traveled to the wild western coast and islands of British Columbia to experience the habitat and life of the Kermode bear, a rare subspecies of the American black bear that often produces creamy white cubs.  These beautiful bears are not albino; their eyes and skin are dark.  They are a rarity that lives only in this rugged temperate rainforest. They have been designated as the official mammal to represent the Canadian province of British Columbia.

We’ve all heard about tropical rainforests.   But rainforests also exist in temperate climates such as the coastal northwest region of North America where rainfall is at least 55 inches a year.  These moist, mossy forests stretch all the way from the redwoods of northern California northward through British Columbia and into Alaska.

Young readers ages 7-10 can enjoy Deborah Milton’s evocative watercolor images and learn about the ecology of the Kermode bear and the Great Northern Rainforest where it lives.  They’ll read about the interconnectness of the plants and animals sharing the bears’ habitat.  For example, salmon swim up streams along the coast to spawn.  Bears catch the salmon, which contain nutrients they acquired while growing up at sea.  The bears drag the fish into the forest to eat them, leaving leftovers that decay, fertilizing the ground.  The bears’ feces and urine also nourish the trees and other plants in the forest.

You can buy our book, selected as an Outstanding Science Trade Book for Students K-12 by the American Academy of Sciences, here, personally autographed as you would like by me, for $12 plus shipping.