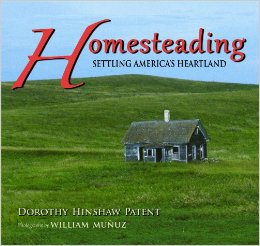 Writing “Homesteading: Settling America’s Heartland” was an easy choice for me.  I’m the daughter of an Idaho homesteader.  And I live in Montana, the state where the most homesteading claims were made.

Congress passed the Homestead Act in 1862, and President Abraham Lincoln signed it.  “This will do something for the little fellow,” he is said to have commented.  Any citizen age twenty-one or older who was head of a household could claim 160 acres of public land.  This plot of land would be a square half-mile.  The homesteader paid a mere $14 to file the claim, then another $4 five years later to pay for the deed.

Homesteaders had many challenges in their lives.  They had to be as self-sufficient as possible, since the nearest neighbor might be miles away with only a rough, narrow dirt road between them.  It could take a full day to hitch up the horse, ride the wagon to town, buy supplies, and return home.

Homesteaders had to build their own home and plow at least 20 acres for crops in order to “prove up” the claim and get full ownership of the property.  Usually no wood was available, so they dug up blocks of thick sod made up of the roots of prairie grasses and the soil around them.  There were rules about the minimum size for the house, the amount of land used to grow grain to sell, and so forth.  A home garden for vegetables and fruit was a necessity.

Most homestead claims were made in the late 1800s and early 1900s, turning most of what had been wild prairies with huge herds of buffalo and other wildlife into farmland.  Many Indian tribes lived on the prairie, and their homelands were taken over by the government and turned into free land for settlers.

This book focuses on the lives of the homesteaders.  To learn more about the effects on the native people, see my books for older readers, “The Horse and the Plains Indians: A Powerful Partnership” and “The Buffalo and the Indians: A Shared Destiny.”  These are also illustrated by Bill Muñoz’s fine photos.