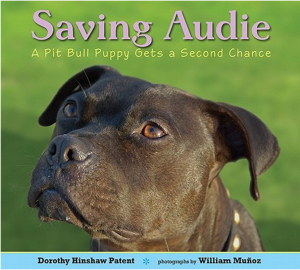 May, 2010: As I knocked on the door, photographer Bill Muñoz and I heard a dog barking loudly from inside the house, and we exchanged nervous glances.  Our anticipation was high, because we were about to meet Audie, a young pit bull rescued three years earlier from Michael Vick’s notorious dog-fighting operation.  Bill and I were working on a book about Audie for young readers, and Audie’s person, Linda, had agreed to let us feature her dog.

Linda let us in as Audie barked like crazy from the far end of the living room.  But his tail wagged just as fast as he barked.  He started to approach, then retreated.

Approach, retreat, over and over, barking and wagging.  Clearly, he wants to be friends but trust is difficult when you’ve learned the hard way that not all people can be trusted. After a bit, Audie settled down.  But as soon as Bill pulled out his camera, the barking began again.  Bill took a few photos between barks, then put the camera away, and we sat down to chat with Linda.  As soon as we focused on conversation instead of on him, Audie jumped onto the couch, snuggled up against my leg, and fell asleep.  I guess he’d decided I could be trusted.

Once Audie was used to us, we followed him and Linda through a typical day. Linda, who had Audie for about 9 months, was working hard to develop his trust in people.  We visited the ferry dock.  Linda had given several people there a stash of treats, and over time Audie started taking their treats and allowing them to pet him, but it was a slow process.

July, 2015:  I’m back in California and take my daughter-in-law Colette and granddaughter Francesca, both fellow dog lovers, to meet Audie.  We knock on the door and Linda and Audie show up together to greet us.  Audie sniffs each of us and wags his tail in greeting.  Maybe he remembers me, but he also greets my family confidently.

What a difference!  The skittish insecure youngster is now a self-assured adult, eager to meet and greet unconditionally.  Over the past five years, Audie has become transformed from an insecure victim into not only an emotionally healthy canine but he’s also an agility dog champion with an overflowing stash of blue and purple ribbons.

Francesca is delighted to meet her hero, and we go outside, where Audie shows off his pole-weaving prowess and some special tricks. Audie’s success was possible thanks to many determined people, especially Donna Reynolds and Tim Racer of the Bay Area group BAD RAP (Bay Area Dog Owners Responsible About Pitbulls) , who championed the right of the Vick dogs and others like them to have a chance at a normal loving doggy life.  Along with other groups like the Best Friends Animal Society in Utah, they got the system changed so that confiscated fight dogs can be tested for safety with people and other dogs instead of facing mandatory euthanasia.

Saving Audie Comprehensive Lesson Plans for Grades 4 and Up