Before this trip, I knew nothing about the dramatic and mysterious ancient sites of this Mediterranean island nation.  What I learned there only increased my curiosity about the cultures and capabilities of prehistoric peoples.

Where I live in Montana, if you say you’re going to Malta, people assume you mean the small far northern town in Montana that shares this name. This other Malta is a fascinating island nation not far from Sicily in the Mediterranean. Malta has something for everyone, as my husband Greg and I found out. Malta captivated us with its mixture of cultures and its long human history, evidenced by ancient stone temples. Modern Maltese culture has its own charm, featuring a lilting language with words from Arabic, Italian, English, French, and an especially delicious Mediterranean cuisine. And then, there was the mysterious Maltese falcon of mystery story and movie fame to find.

We made the mistake of renting a car despite advice that the excellent, inexpensive bus system goes everywhere. We quickly learned how easily we could get lost on a small island that has more roads that twist and turn than we could have imagined. After driving hither and yon and beyond, we finally found our destination, a time share resort in the town of Qawra. The Maltese language looks very strange to our eyes, with ‘q’s without ‘u’ and many ‘k’s and ‘x’s, and challenging pronunciation. For example, Qawra is pronounced ‘owra;’ the initial ‘q’ is silent.

We were determined to conquer the roads, so the next day we headed for the seaside village of Marsaxlokk (MAR-suh-shlok), with the promise of a large Sunday outdoor market. The drive should have taken about 25 minutes, but we arrived in about an hour and a half, having seen much of the island by mistake. We ended up with three different maps in a desperate attempt to find our way, but only on day six did we finally fail to make a major driving error.  At least everyone learns English in school, so when we got totally lost, the friendly locals would help us.

Marsaxlokk is a lovely village at the head of a gentle bay filled with bright blue fishing boats. After exploring the market and selecting some fresh fish for our evening meal, we ordered seafood pastas at one of the many seaside restaurants overlooking the harbor. The terrific food reminded us of meals we’d eaten in Naples and Sicily.

We were tempted to explore the modern Mediterranean culture of the island more thoroughly, but our main goal was to see as many prehistoric sites as we could. We started by visiting one of the more “recent” temple complexes at Tarxien (Tar-ZHEEN), an area active about 5,150 to 4,500 years ago. Many stone surfaces at Tarxien are smoothed and carefully incised with graceful spiral-based patterns.

The greatest mystery of Tarxien is the remains of a giant statue. Only the bottom part, small feet supporting enormous, balloonlike legs topped by the fringe of a pleated skirt that’s roughly broken off above. What did the intact statue look like? Was it a man or a woman, a goddess or a priest or some other entity? No one knows, but it must have stood over nine feet tall.

We drove over bumpy, narrow roads through the barren countryside to reach our next destination, the amazing ancient temples of Hagar Qim (Hagar EEM) and Mnajdra (Mih-NAY-dra). These impressive monuments were built on the windswept slopes of sea cliffs starting around 5,500 years ago, centuries before any other culture in the world was constructing free-standing stone buildings. Not only that, but one of the huge stones dragged a long distance uphill to Hagar Qim is more than 20 feet long and more than 8 feet tall; it is estimated to weigh about 20 tons. Today, the structures look quite primitive, surfaces scoured and pitted over the millenia by salt air. But when new, they were smooth and painted, with roofs overhead.

These temple complexes only whetted our appetite for the ancient cultures of Malta, so the next day we took the ferry across to the neighboring island of Gozo, also part of the nation called Malta. Gozo is much smaller and quieter than the main island, and nothing there is very far from anything else. We visited the Ggantija (JY-gan-TEE-ya) temple complex, better preserved than those on the main island. Their walls stand higher, giving a better sense of their original size and making it easier to imagine the plastered and ochre-painted walls.

After viewing the temples, we drove to the peaceful seaside village of Marsalforn, where we relaxed with another delicious Mediterranean seafood feast accompanied by the very pleasant local wine.

As our week drew to a close, we realized we couldn’t escape facing the traffic around Valletta any more n we had to visit the National Museum of Archaeology. We parked safely away from the center and explored the city on foot. We lunched in a funky old building, part restaurant, part bar and pool hall.

Taking in my surroundings, I gazed up through the atrium above and there it was, perched before a stained glass Maltese cross -a falcon statuette, wings outstretched, a symbol of the nation popularized by Hollywood.
Of course, I had to take a photo.   The actual species of this Maltese falcon is extinct, but is still an important symbol for the nation.

The museum features beautiful altars from the temples, decorated with various spiral designs and carefully incised “pock marks,” as well as fat goddess statues of all sizes. 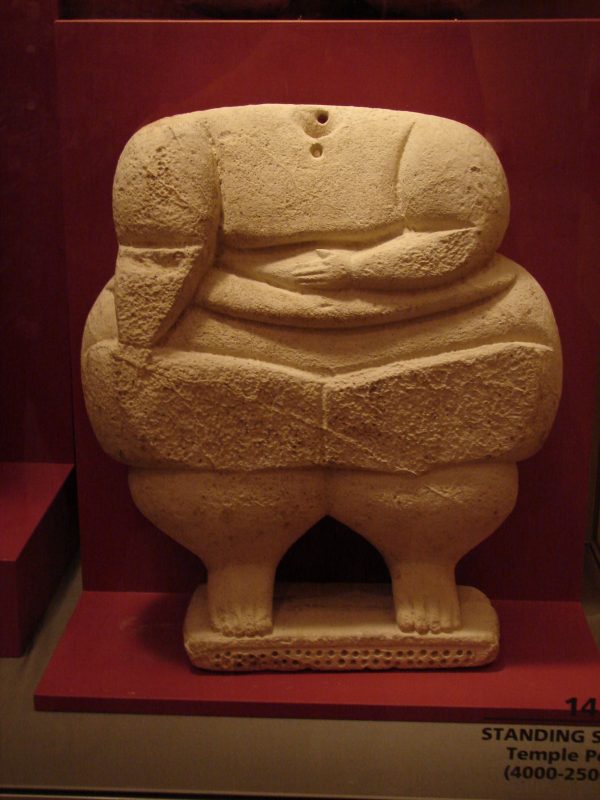 The necks of many of the statues have holes that indicate that a head, or heads, could be put in place and removed. Did the goddess have seasonal moods depicted by various heads? No one knows. 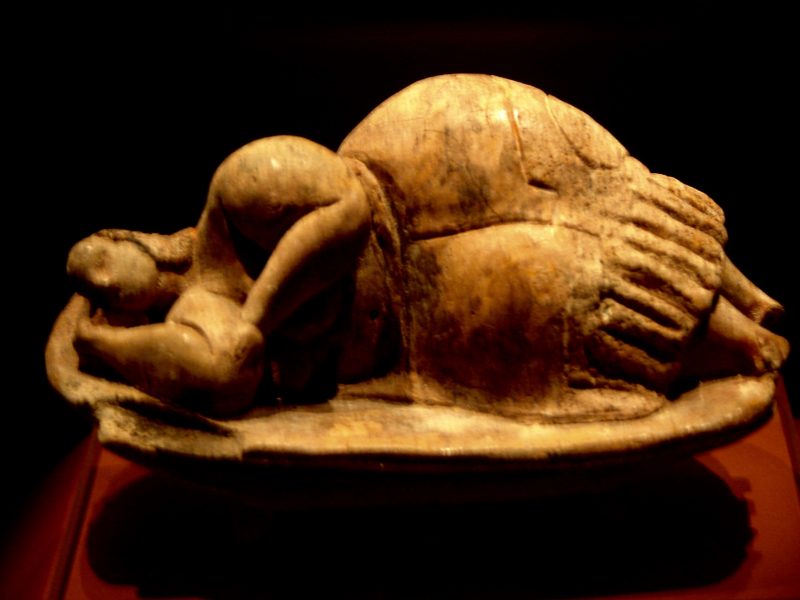 The most memorable piece is one of the smallest, a complete goddess only about 5 inches long, lying peacefully on her side. Was she dead, or only resting? Rather than answering questions, the museum only deepened the mysteries.

The secrets of ancient Malta still intrigue me, but chances are
archaelogists will never be able to decipher them. With no written language, the only clues remaining are the impressive monuments, their graceful decoration, and the mysterious surviving statues.
If you go
Malta is easy to reach from just about anywhere in Europe. We took a very inexpensive flight on Ryan Air from Dublin. Accomodations range from fancy tourist hotels to modest condos. In addition to their own Mediterranean cuisine, Maltese restaurants often feature typical English food, since many British people escape winter by turning off the heat and using the money they save to travel to Malta for the winter. The weather can be windy, but it never gets very cold.