I recently made an appearance at the beautiful new Billings, Montana, public library to talk about the dog books I’ve written for children.  The first, “Maggie: A Sheep Dog,” about a sheep guard dog, came out in 1986, and my next book, “Dog on Board: The True Story of Eclipse the Bus Riding Dog” will be published this October.  Each of my eight dog books has many stories about how it came to be, so I had fun deciding what to focus on for each book when I gave my presentation.

After I finished my talk,  Officer Firebaugh of the Billings Police Department and his police dog Kooko demonstrated how they work together.  You can see the cover image for “Dog on Board” on the screen in the background.  Everyone loved Officer Firebaugh’s great presentation about the training and work of police dogs, but of course the favorite part came as Kooko enthusiastically demonstrated how he does his job.

Kooko knows how to locate four illegal substances–cocaine, heroin, methamphetamine, and marijuana. When Kooko succeeds in finding one of them, he’s rewarded by getting to play with his toy.

With any working dog, the key to successful training and reliability is for the dog to know it will be rewarded for doing its job.  Kooko knows if he finds an illegal drug he’ll be given a chance to play with his toy, a sturdy cylinder that can withstand lots of chewing and rough play.  He especially loves it when Officer Firebaugh joins him in play.

Their play can get quite intense–Kooko will hang onto his toy no matter what, even when Officer Firebaugh lifts him off the ground and whirls him around! 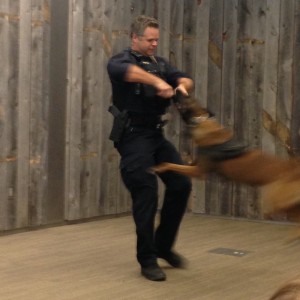 Kooko also knows how to chase down and detain a suspect.  Training for this work is especially important, since the goal is to stop a suspect from getting away, not hurting him.  When a police dog grabs a suspect by the arm to stop him, the dog isn’t being “vicious.”  It’s been trained by using a padded arm sleeve, which the dog loves to chew, just like it chews its toy.  If the dog obeys the commands during bite training, it’s rewarded by getting the arm sleeve to chew.  Once it learns this process, it knows it will get to play with its toy once the suspect is under control.

Even though I’d written about police dogs in my book “Super Sniffers: Dog Detectives on the Job,” I learned some new facts myself from Officer Firebaugh’s presentation.  For example, I knew that most of these dogs come from other countries.  Their commands are in a language other than English, so the handler needs to learn the proper words to use.  I hadn’t realized an advantage of that situation–since the dog doesn’t understand commands in English,  such as “Stay” or “Sit” or “Leave it,” a suspect can’t stop the dog from attacking by using these familiar English language commands!

Altogether, I think I enjoyed watching Kooko and his handler and hearing about their work as much as everyone else  in the audience!  I can never get enough of learning about and watching canines perform the many jobs they do for us.