During my European trip I was fortunate enough to be able to visit the Clever Dog Lab in Vienna, where scientists are studying different fascinating aspects of dog intelligence, brain function, and behavior.  The dogs used in the experiments are family pets from Vienna and the surrounding area whose owners have signed up to be included in the studies.  The dogs enjoy coming to the lab as they get a lot of positive attention, have fun, and eat treats.

The lab studies many aspects of dog behavior, including various aspects of problem solving.  Lead investigator Dr. Ludwig Huber greeted our little group of curious dog lovers–me, husband Greg, and friends Linda and Annick, very warmly.  He is clearly proud of his lab, the researchers, and the dogs.  The lab has some very sophisticated equipment, including  projection and sound playing systems, an eye tracker that can record exactly where on a screen the dog is looking, and touch screens that record the touches of doggy noses on the screen images.

When we arrived, a dog named Clio was learning how to use her nose to get treats from an automated feeding system. 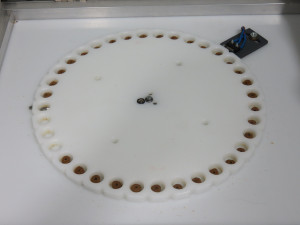 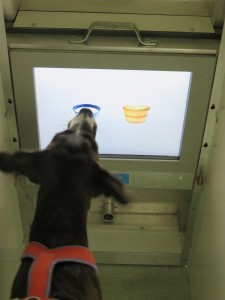 Each cavity in the circle contains a small dog treat.  Clio has to choose between the two images on the touch screen.    When Clio noses the correct image, the feeder drops a treat down into a container on her right.  We watch her at work–it’s amazing how fast she pokes her nose, then turns to her right to gobble down the treat and gets right back to work.  Sometimes the correct image is on the right, sometimes the left, but she knows which one to poke and makes very few mistakes.  Her nose touches are recorded automatically so that researchers know how often she’s right and wrong; no one needs to watch what’s going on.

Lola is working with an even fancier set of equipment.  It’s designed to track where a dog’s eyes are looking when images are projected onto a screen. 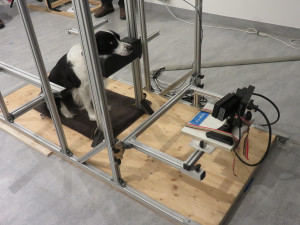 Lola has learned to hop up to the metal frame and rest her muzzle on the padded head rest and keep her head still.  To the right you can see the infrared camera that accurately traces just where Lola is looking at on the screen you see in the second photo.  By recording where the dog is looking on the screen, the scientists can tell what draws their attention and make conclusions about what could be going on in the dog’s mind.

By using family pets for its research, the lab has access to a list of thousands of dogs whose owners have registered with the lab, different breeds and ages of dogs, different temperaments, and so on.  The owners, scientists, and especially the dogs all enjoy the work and the humans at least take pride in making important contributions to science.  The dogs enjoy the attention, the different activities, and most of all, the treats.